Spirit of the team

Our Spirits
Our Ranch and Distillery
Our Heritage
Our Spirits

We founded our craft distillery in 2014, and the brand quickly evolved into the “Iron Wolf” name we know and love today. Inspired by our Siberian Grey Wolf, Luna, we felt that the that the spirit and character of the wolf captured the nature of our team, our love of Texas, and our bold lineup of unique products… Bold Spirits, Texas Attitude.

Our vision was to create a unique brand – with products that are as bold and diverse as the pack. We spent a good deal of time on the brand design as well as our custom bottles and labels. We wanted a look and feel to be proud of, a bottle that feels good in the hand and looks great on the shelf. With a love of friends and family, pride of ownership, and a keen interest in and talent for making delicious craft spirits, we officially opened our doors in 2017.

Our Ranch and Distillery

In addition to creating bold spirits and a powerful brand, we also wanted to create a destination where everyone can come together for memorable experiences, complete with top-notch facilities. We couldn’t imagine a better place for this than in the beautiful Texas hill country that we love so much.

We decided that the only way to fulfill our unique vision was to start from the ground up. We found the perfect property in our own rural hometown of Spicewood, Texas. For four years we designed, improved, developed, and built the dream for an “Alpha class” craft distillery – all with our own hands. Our fabulous 15-acre property features beautiful oak trees and elevated 360-degree views of the hill country. Our first building, the “Still House”, currently houses our stills, tasting room, and a full bar in addition to plenty of shaded patio seating, “Bourbon Garden” and stage for live music. We have some exciting expansions coming soon, so be sure to check back for updates as we grow!

The Texas Declaration of Independence parallels somewhat that of the United States initial colonies, signed almost sixty years earlier. It declares that Texas a free and independent republic – the only such state ever to do so!

“We, therefore, the delegates with plenary powers of the people of Texas, in solemn convention assembled, appealing to a candid world for the necessities of our condition, do hereby resolve and declare, that our political connection with the Mexican nation has forever ended, and that the people of Texas do now constitute a free, Sovereign, and independent republic, and are fully invested with all the rights and attributes which properly belong to independent nations; and, conscious of the rectitude of our intentions, we fearlessly and confidently commit the issue to the decision of the Supreme arbiter of the destinies of nations.” 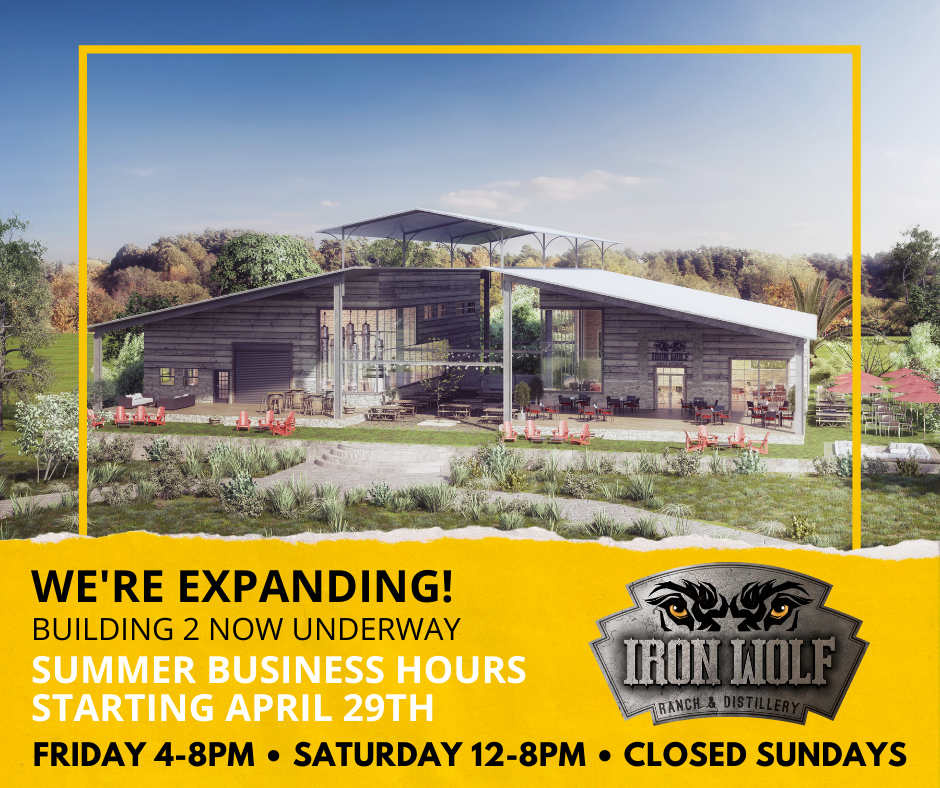 Construction on the long-awaited building 2 - “The Den” is officially underway! We can’t wait to bring you an even cooler live music experience, new cocktail additions, indoor seating, a playground expansion and more! Please excuse the mess in the meantime and check out our Summer business hours before your next visit. Open Fridays 4-8pm, Saturdays 12-8pm and closed Sundays.

Escape into the beauty of the Texas hill country. Visit our 15-acre property and enjoy delicious cocktails, live music and panoramic views

Luna the Siberian Gray Wolf is the inspiration behind our name! Snap a picture with Luna at the Ranch and send it to us here to be featured on our site.